Ten swats each to prove their love

Our latest spanking film is inspired by the F/M spanking art of Red Rump. 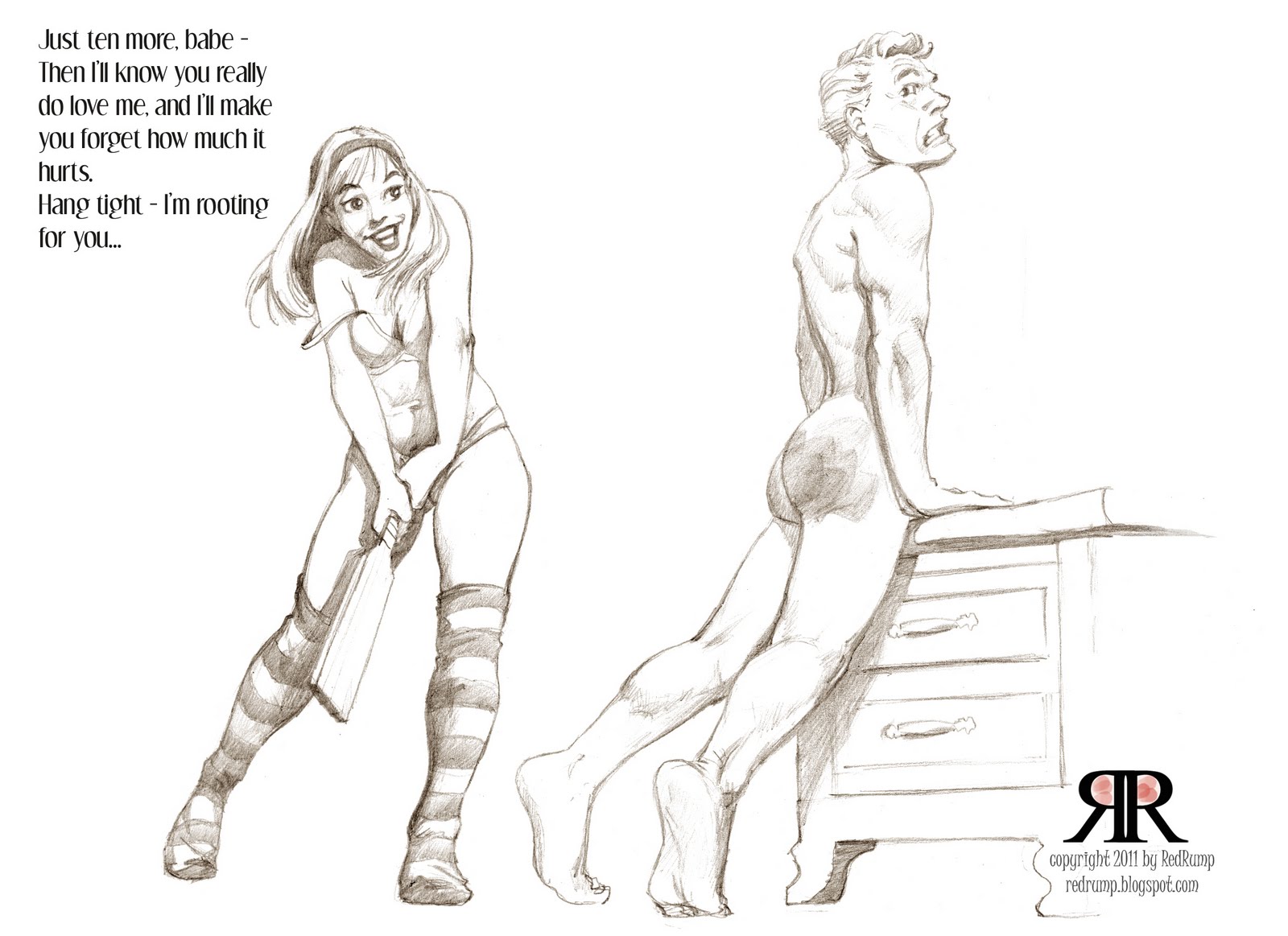 I liked this drawing so much that I posted it on this blog once before... and now I've made a video version. I hope Red Rump doesn't mind me using his art as inspiration! Here's what I wrote last time:

This is adorable: the playfulness, the sexiness, the cheerful, affectionate supportiveness of the spanker even as she prepares to wallop his arse again. I fucking love that she's giving him a hardcore paddling while wearing long stripy socks and not much else.

Originally Prove Your Love was conceived as an F/M video, but Michael, like me, has been enjoying exploring his top side lately, and I'm not one to pigeonhole my performers into boxes that are too small for them. He said he'd love to do some topping on our shoot, and since I;ve started playing with other switches I'm very excited about producing films which show two people switching both ways in the same scene.

Switch visibility is not always great in the kink scene, especially for men, and people who present primarily as tops - I think there's still an idea that showing people your submissive side will somehow make you less credible or attractive as a top. It's bollocks, of course. The kink scene is full of switch play, so why not show more switch spanking on video? Two college sweethearts have both been players in their time, but now want a way to prove their commitment. They decide to follow the fraternities, and challenge each other to pledge their troth by bending over for ten swats with the large wooden paddle. If you take this, you must really love me!

This scene was a LOT of fun to make. Before we started I wasn't sure how plausible the scenario was, but it actually flowed really well. There ended up being a sort of light-hearted rivalry between the two sweethearts which was great fun to play out, and despite the characters' aversion to sentimentality, the result is genuinely affectionate and adorable.

I love the idea of two equals daring each other to take a punishment to prove their commitment - it's simultaneously edgy, funny and sweet. And the college fraternity theme brings whole new meaning to the phrase "pledge your troth"! Neither of the characters in this scene would describe themselves as "kinky", but by the time they'd exchanged their ten swats each I suspect they might have developed a bit of a taste for this sort of play ;)

It's quite rare to see a spanking production before in which a heterosexual couple play both ways in the same film, but it's something I'm really interested in watching at the moment. (Surely this can't be the first ever film to show F/M and M/F spanking between the same couple?) I hope you enjoy this fresh, entertaining take on male/female spanking. I certainly enjoyed both sides of this one, and it's great to see that Michael can dish it out as well as take it!